The origin has been migrated to GitFlic

since on 2022-04-15 the Github administration, without any warning nor explanation, deleted libmdbx along with a lot of other projects, simultaneously blocking access for many developers. For the same reason is blacklisted forever.

GitFlic’s developers plan to support other languages, including English 和 中文, in the near future.

The Future will (be) Positive. Всё будет хорошо.

Please refer to the online documentation with C API description and pay attention to the C++ API.

Questions, feedback and suggestions are welcome to the Telegram’ group.

For NEWS take a look to the ChangeLog or the TODO.

Historically, libmdbx is a deeply revised and extended descendant of the amazing Lightning Memory-Mapped Database. libmdbx inherits all benefits from LMDB, but resolves some issues and adds a set of improvements.

The next version is under active non-public development from scratch and will be released as MithrilDB and libmithrildb for libraries & packages. Admittedly mythical Mithril is resembling silver but being stronger and lighter than steel. Therefore MithrilDB is a rightly relevant name.

MithrilDB will be radically different from libmdbx by the new database format and API based on C++17, as well as the Apache 2.0 License. The goal of this revolution is to provide a clearer and robust API, add more features and new valuable properties of the database.

Comparison with other databases

For now please refer to chapter of “BoltDB comparison with other databases” which is also (mostly) applicable to libmdbx.

libmdbx is superior to legendary LMDB in terms of features and reliability, not inferior in performance. In comparison to LMDB, libmdbx make things “just work” perfectly and out-of-the-box, not silently and catastrophically break down. The list below is pruned down to the improvements most notable and obvious from the user’s point of view.

Other fixes and specifics

Historically, libmdbx is a deeply revised and extended descendant of the Lightning Memory-Mapped Database. At first the development was carried out within the ReOpenLDAP project. About a year later libmdbx was separated into a standalone project, which was presented at Highload++ 2015 conference.

Since 2017 libmdbx is used in Fast Positive Tables, and development is funded by Positive Technologies.

On 2022-04-15 the Github administration, without any warning nor explanation, deleted libmdbx along with a lot of other projects, simultaneously blocking access for many developers. Therefore on 2022-04-21 we have migrated to a reliable trusted infrastructure. The origin for now is at GitFlic with backup at ABF by ROSA Лаб. For the same reason is blacklisted forever.

Howard Chu hyc@openldap.org is the author of LMDB, from which originated the libmdbx in 2015.

Martin Hedenfalk martin@bzero.se is the author of btree.c code, which was used to begin development of LMDB.

Currently, libmdbx is only available in a source code form. Packages support for common Linux distributions is planned in the future, since release the version 1.0.

Please, avoid using any other techniques. Otherwise, at least don’t ask for support and don’t name such chimeras libmdbx.

The amalgamated source code could be created from the original clone of git repository on Linux by executing make dist. As a result, the desired set of files will be formed in the dist subdirectory.

Both amalgamated and original source code provides build through the use CMake or GNU Make with bash. All build ways are completely traditional and have minimal prerequirements like build-essential, i.e. the non-obsolete C/C++ compiler and a SDK for the target platform. Obviously you need building tools itself, i.e. git, cmake or GNU make with bash. For your convenience, make help and make options are also available for listing existing targets and build options respectively.

The only significant specificity is that git’ tags are required to build from complete (not amalgamated) source codes. Executing git fetch --tags --force --prune is enough to get ones, and --unshallow or --update-shallow is required for shallow cloned case.

So just using CMake or GNU Make in your habitual manner and feel free to fill an issue or make pull request in the case something will be unexpected or broken down.

The amalgamated source code does not contain any tests for or several reasons. Please read the explanation and don’t ask to alter this. So for testing libmdbx itself you need a full source code, i.e. the clone of a git repository, there is no option.

The full source code of libmdbx has a test subdirectory with minimalistic test “framework”. Actually yonder is a source code of the mdbx_test – console utility which has a set of command-line options that allow construct and run a reasonable enough test scenarios. This test utility is intended for libmdbx’s developers for testing library itself, but not for use by users. Therefore, only basic information is provided:

Anyway, no matter how thoroughly the libmdbx is tested, you should rely only on your own tests for a few reasons:

By default libmdbx track build time via MDBX_BUILD_TIMESTAMP build option and macro. So for a reproducible builds you should predefine/override it to known fixed string value. For instance:

Of course, in addition to this, your toolchain must ensure the reproducibility of builds. For more information please refer to reproducible-builds.org.

There are no special traits nor quirks if you use libmdbx ONLY inside the single container. But in a cross-container cases or with a host-container(s) mix the two major things MUST be guaranteed:

When building libmdbx as a shared library or use static libmdbx as a part of another dynamic library, it is advisable to make sure that your system ensures the correctness of the call destructors of Thread-Local-Storage objects when unloading dynamic libraries.

If this is not the case, then unloading a dynamic-link library with libmdbx code inside, can result in either a resource leak or a crash due to calling destructors from an already unloaded DSO/DLL object. The problem can only manifest in a multithreaded application, which makes the unloading of shared dynamic libraries with libmdbx code inside, after using libmdbx. It is known that TLS-destructors are properly maintained in the following cases:

Linux and other platforms with GNU Make

To build the library it is enough to execute make all in the directory of source code, and make check to execute the basic tests.

If the make installed on the system is not GNU Make, there will be a lot of errors from make when trying to build. In this case, perhaps you should use gmake instead of make, or even gnu-make, etc.

As a rule on BSD and it derivatives the default is to use Berkeley Make and Bash is not installed.

So you need to install the required components: GNU Make, Bash, C and C++ compilers compatible with GCC or CLANG. After that, to build the library, it is enough to execute gmake all (or make all) in the directory with source code, and gmake check (or make check) to run the basic tests.

For build libmdbx on Windows the original CMake and Microsoft Visual Studio 2019 are recommended. Please use the recent versions of CMake, Visual Studio and Windows SDK to avoid troubles with C11 support and alignas() feature.

For build by MinGW the 10.2 or recent version coupled with a modern CMake are required. So it is recommended to use chocolatey to install and/or update the ones.

Another ways to build is potentially possible but not supported and will not. The CMakeLists.txt or GNUMakefile scripts will probably need to be modified accordingly. Using other methods do not forget to add the ntdll.lib to linking.

It should be noted that in libmdbx was efforts to avoid runtime dependencies from CRT and other MSVC libraries. For this is enough to pass the -DMDBX_WITHOUT_MSVC_CRT:BOOL=ON option during configure by CMake.

An example of running a basic test script can be found in the CI-script for AppVeyor. To run the long stochastic test scenario, bash is required, and such testing is recommended with placing the test data on the RAM-disk.

libmdbx could be used in WSL2 but NOT in WSL1 environment. This is a consequence of the fundamental shortcomings of WSL1 and cannot be fixed. To avoid data loss, libmdbx returns the ENOLCK (37, “No record locks available”) error when opening the database in a WSL1 environment.

Current native build tools for MacOS include GNU Make, CLANG and an outdated version of Bash. Therefore, to build the library, it is enough to run make all in the directory with source code, and run make check to execute the base tests. If something goes wrong, it is recommended to install Homebrew and try again.

To run the long stochastic test scenario, you will need to install the current (not outdated) version of Bash. To do this, we recommend that you install Homebrew and then execute brew install bash.

We recommend using CMake to build libmdbx for Android. Please refer to the official guide.

To build libmdbx for iOS, we recommend using CMake with the “toolchain file” from the ios-cmake project.

Please refer to the online libmdbx API reference and/or see the mdbx.h++ and mdbx.h headers.

10,000 transactions in sync-write mode. In case of a crash all data is consistent and conforms to the last successful transaction. The fdatasync syscall is used after each write transaction in this mode. 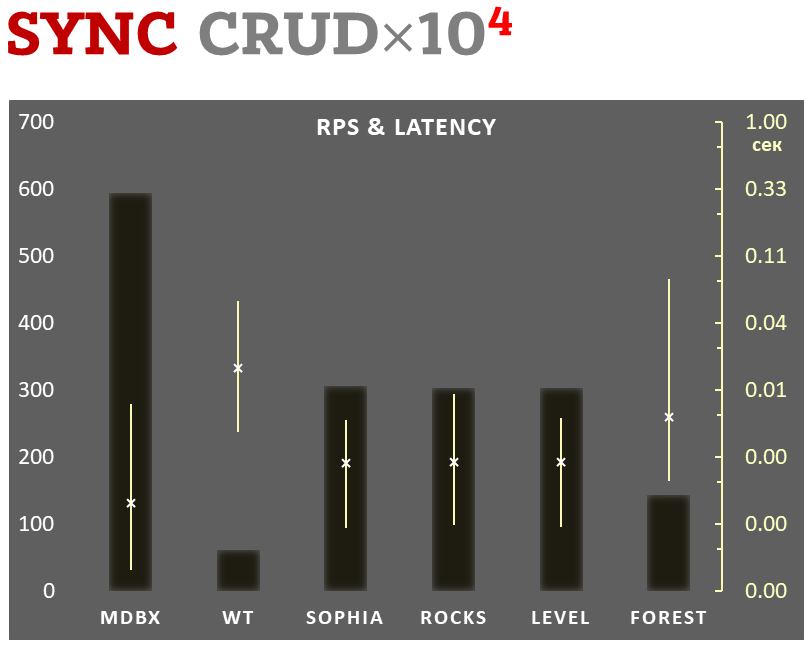 100,000 transactions in lazy-write mode. In case of a crash all data is consistent and conforms to the one of last successful transactions, but transactions after it will be lost. Other DB engines use WAL or transaction journal for that, which in turn depends on order of operations in the journaled filesystem. libmdbx doesn’t use WAL and hands I/O operations to filesystem and OS kernel (mmap). 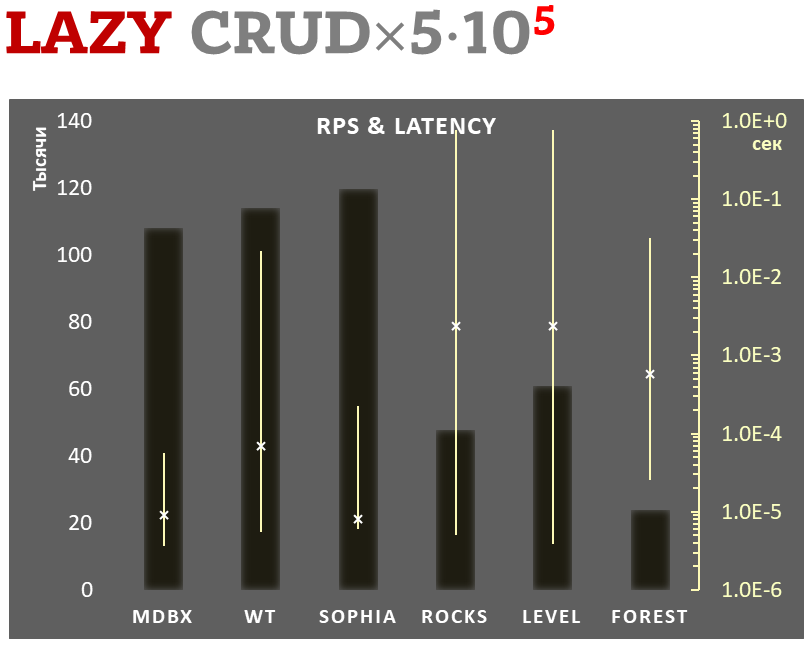 1,000,000 transactions in async-write mode. In case of a crash all data is consistent and conforms to the one of last successful transactions, but lost transaction count is much higher than in lazy-write mode. All DB engines in this mode do as little writes as possible on persistent storage. libmdbx uses msync(MS_ASYNC) in this mode. 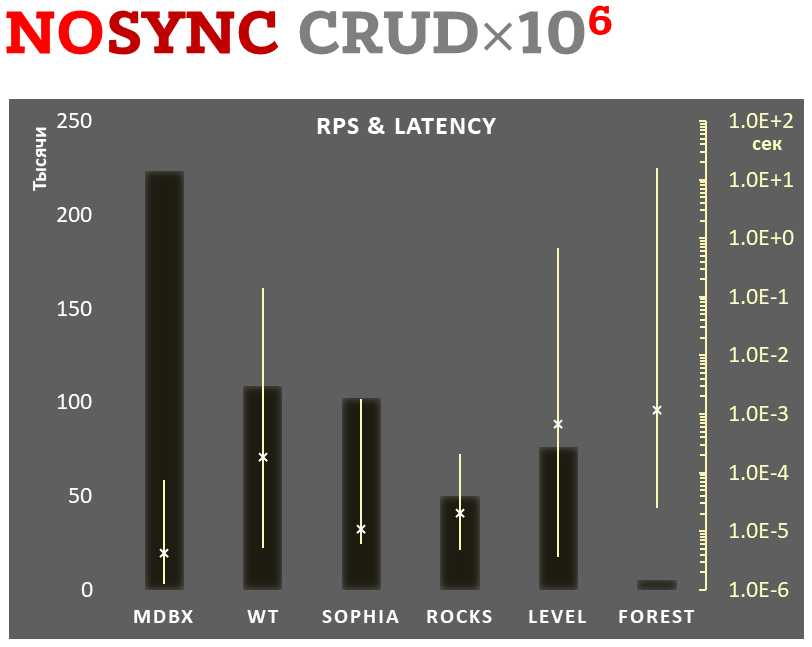 ForestDB is excluded because benchmark showed it’s resource consumption for each resource (CPU, IOPs) much higher than other engines which prevents to meaningfully compare it with them.

All benchmark data is gathered by getrusage() syscall and by scanning the data directory. 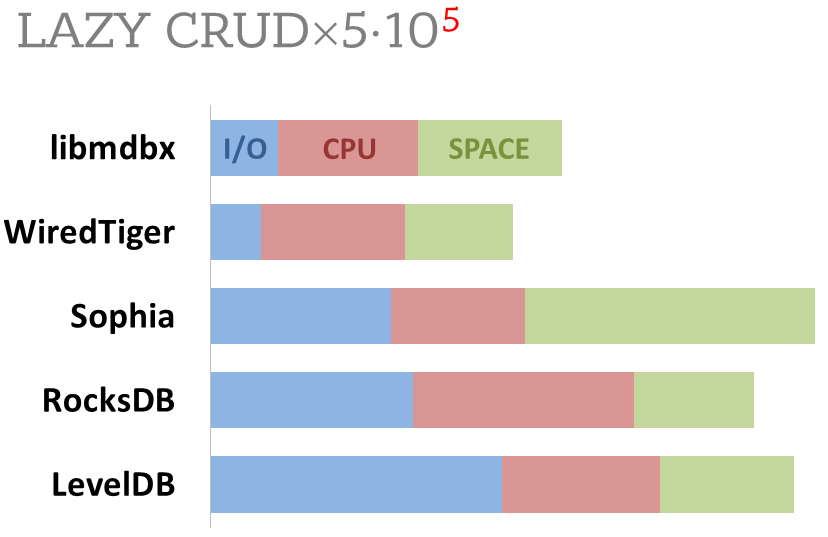